The recent release of the Census Bureau’s Voting and Registration data from the Current Population Survey finally allows us to look deeper into the population that turned out to vote this last November.  And the results are quite astonishing. 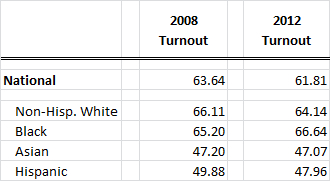 * Turnout is measured here as total votes divided by the voting-age citizen population. Data are from the CPS microdata for the Voting and Registration Supplement.

END_OF_DOCUMENT_TOKEN_TO_BE_REPLACED

Now that most states have finalized and submitted their official election results (yes, it does take that long), we can take a closer look into state and local turnout rates for the 2012 presidential election.

But first, an overview of the results…

As we all know, Barack Obama will be starting his second term after he is inaugurated in a couple of days.  While it would probably be hasty to say that Obama received a huge “mandate” from the election back in November, it’s fair to say he defeated Mitt Romney handily, with room to lose battleground states and still win.  In fact, one of the more surprising results from the presidential election is how little the electoral map changed from 2008.  The county-level results for 2012 and 2008 below illustrates this point:

Obama’s margins over his Republican challenger shrunk in most battleground states and was enough to flip Indiana and North Carolina, the only two states to switch between 2008 and 2012.  But despite the slow and tenuous economic recovery, high unemployment, a controversial health reform law, and a slew of other things Obama had going against him during the campaign, nothing much changed.  This was also despite lower turnout rates across the country.

END_OF_DOCUMENT_TOKEN_TO_BE_REPLACED

In my humble opinion, the biggest news coming out of the election last night was not Ohio.  Instead, the polling results coming out of Virginia, that heavily favored Obama early in the evening, set the tone for the entire night.  The story of what happened in Virginia exemplifies where our politics in this country now stand.  Obama’s repeat victory in the Old Dominion underscores what was probably the biggest factor in the 2012 election: demographics.

For our regular readers, especially those who read our Red State, Blue State report back in July, this shouldn’t come as too much of a surprise.  Ohio, Florida, and other swing states are used to the attention and have been “purple” for a long time now. Obama’s repeat victory in Virginia, however, a state that has voted consistently for Republican presidential candidates before 2008, is really big news.  More than anything else, Obama’s victory in Virginia means that 2008 wasn’t a fluke, but rather represented a fundamental political realignment in the country.

That realignment is bad news for Republicans.  The Republican party has serious demographic problems.  Virginia’s shifting demographics, like that of the nation, have been dramatic in just the last few decades with Hispanics and Asians driving most population growth and changes in the electorate.  Republicans have had considerable difficulty gaining the votes of these groups.  In Virginia, most of the influx and growth in Hispanic and Asian populations is occurring around the Washington D.C. suburbs in Northern Virginia (NoVa).  It was therefore not surprising that NoVa was the focus of the national news media, and results from that region look more like those from 2008 than from 2004. 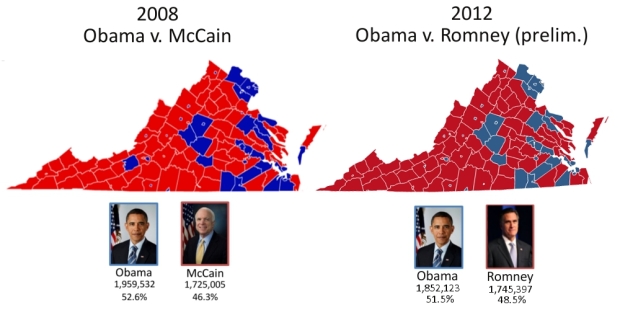 END_OF_DOCUMENT_TOKEN_TO_BE_REPLACED

As an extension of Michele’s recent post on turnout in Virginia, I decided to take a look at turnout rates at the national level.  Using data from Michael McDonald’s U.S. Elections Project, CQ Press county election results, and the U.S. Census Bureau, I analyzed patterns in voter turnout rates for recent presidential elections.

Virginia’s statewide turnout rate in 2008 ranked as one of the highest in the nation.  In 2008, Virginia ranked 13th in turnout compared to other states with a record-setting 67.0% of eligible voters showing up at the polls, much higher than the national average of 61.6% and higher than other southern states. END_OF_DOCUMENT_TOKEN_TO_BE_REPLACED